Presentation of the institute

The State Music Conservatory “Arturo Toscanini”, unique Institution of High Musical Artistic Formation (AFAM) of the Agrigentinian territory, is a consolidated, virtuous and efficient reality; it was founded in 1991 from the Regional Province of Agrigento, now named Agrigento “Libero Consorzio dei Comuni”,  that contributes to its good functioning.The Conservatory receives State and Regional fundings and it is proud of the new innovative location, totally restructured with huge investments, assigned in 2018 by the Ribera Municipality, totally restructured with huge investments and adapted to the needs of AFAM National system about acoustic treatment, new and precious instrumental equipment, high technology ( LIM, TABLET, IT services, DPO).

The Conservatory was born in 1991 to satisfy the consistent demand of classical music study in a territory, until then lacking, of a public musical Institute of high quality and professional training.
After 32 years, the demand has grown more and more with the users that today come, not only from all over the Sicily, but also from other Italian regions and from foreign Countries (CHINA, MALTA, VENEZUELA) thanks to the renewal and expansion of the training offer (today the Conservatoire has 28 degree Courses in the Classical, Jazz and Pop-rock Departments), technological innovation, informatic services and the quality of services and training and production activities provided. The equalization to the State Music Conservatories, obtained in 2003 by Decree of the President of the Sicilian Region, and accreditation in the National AFAM System, conferred in 2009 by the Ministry of University and Research following strict checks on the qualitative targets reached, commits the Institute to carry out European didactic courses under Law 508/99, which provides to the reform of the sector under the supervision of the AFAM Department to the previously mentioned Ministry.

Although since 2009, by Ministerial approval of the Statute of Autonomy, the Institute has been transformed “ope legis” into the Superior Institute of Musical Studies – ISSM, a Public Institution of University level able to issue First and Second Level Academic Diplomas in Musical Disciplines, and despite also the Academic Diplomas in Musical Disciplines of the old system have been equated to the Degrees by Law 268/02 for the purposes of access to public competitions, the Institute  obtained the promotion to become State Conservatoire with Ministerial Decree n. 1178 on 14 October 2022 after a complicated process and a severe evaluation of an inter-ministerial commission, brilliantly overcome.

The New System, in line with the Lisbon Treaty and the Bologna Process, is identical to university courses and is therefore structured with the European System of training credits (transferable in EU countries with the ETCS system) for the mutual recognition of studies carried out and to also allow international student mobility through special programs such as theLifelong Learning Program – Erasmus- UE ed Extra UE –incresead during last years,  according to Ministerial statistical data.

Since 2016, with the new Governance, the Conservatory has obtained impressive and visible results with a raise strategy, that, despite all the difficulties, allowed it to reach important results: a new appropriate and definitive location, a complete Offer with First and Second Level University Courses, an increase of enrolled students in Academic Courses of about 700%, high visibility with national and international events, and, within A.A.2021/22, the most awaited goal: the confirm of the Nationalization. In fact, despite the very serious economic criticality caused by the default of the Founding Body, which begun in 2014 and is now outdated, it has proven to be a virtuous and reactive Institution economically, innovatively and competitively for the quality and variety of the proposed training offer, and has successfully relaunched the didactic, production and internationalization activities demonstrated by the increased general users and above all, by the university students (more than quintupled), which educationally offers, the great professionalism and the high artistic profile of our teachers, together with the great commitment of all the staff who have made the Teaching Courses palatable and worthy of attention also for students from other European countries from whichthey continue to receive requests for mobility Incoming Study Erasmus and from international students.
In order to strengthen and complete the professional training of young musicians,the production and Third Mission activity throughout the recent years, has been significantly increased with an average of 60-70 performances a year of National and International relevance thanks to strategic agreements and memoranda of understanding signed by prestigious partners, Lyrical-Symphonic Theatres, International Festivals and Academies, Extra UE Conservatories, relevant Associations (European Commission/MIC/ AIPFM – European Music Fest, Massimo Theatre of Palermo’s Foundation, Lipsia Opera Theatre, Sicilian Symphonic Orchestra Foundation, TAOARTE Ancient Taormina Theatre, Pirandello Theatre’s Foundation in Agrigento, Sicily Jazz Festival, The Dionysiac Festival in Segesta/Calatafimi, The Queen Musical Festival of Maenza, Windsor Piano’s Academy – UK, Glazunov Conservatory of Petrozavodsk- Russian Federation, La Cantoria in Campitelli’s Association in Rome, Festival A. Schweitzer in Palermo) and in collaboration with the local authorities(Municipalities, Associations, Regional Superintendence of Cultural Heritage, Archaeological Parks). Among the most important partners: Tangsham Chinese University to realize Masterclass and didattic and production project, FEMURS (Sicilian Regional Federation with Conservatories of Trapani and Messina – first Federation in the South of Italy) founded e promoted from the Institute; the University of Palermo  and University Consortium of Agrigento with common project of new academic Courses financed also by Sicilian Regional Education Department; the other institutions of the Music Education Territorial System (Music Middle and High Schools) for a better common strategy to armonize Music Courses Programmes e to divulgate more the Music Culture, useful to form good persons and good citizens.

The Excellency of Toscanini: the Conservatory carries out intense production activities at National and International level collaborating with important Institutional Bodies, Theatres, Foundations, Associations, Festivals, Italian, European and Non-European AFAM Institutions (European Commission/Italian Culture Ministry/Ass. Italian Music Festival, Pirandello Theatre in Agrigento, Massimo Theatre in Palermo and the Sinfonic Orchestral Foundation in Palermo, the Ancient Theatre in Taormina, Theatre of the Opera in Leipzig, Samonà Theatre in Sciacca, Municipal Theatre in Vittoria, Greek Theatre in Segesta, Festival “Le Dionisiache” in Calatafimi/Segesta, Festival of Maenza, Schweizter Festival in Palermo, the Valley of the Temples of Selinunte, Archaeological Parks, Pantelleria and “Cave di Cusa”, Conservatoires Partners FEMURS and Erasmus, etc.) and with the local municipalities in order to highlight young talents and complete their professional training. The Institute has distinguished itself by obtaining in 2014 the 2nd place in the National competition “Conservatories in comparison – Rai Uno Mattina”; from 2016 to 2022 it has obtained, with five editions of the format “E Lucevan le Stelle”, the sold out and collection record, even in the midst of the pandemic, at the prestigious and historic “Le Dionisiache” of Segesta/ Calatafimi Festival; since 2019, it is an official partner of the European Music Festival/Italy and has organised events of relevance and European with the direct sponsorship of the European Commission and the MIC presented every year at a press conference in ROME in the presence of the Italian Minister of Culture, described below: in 2019 in the Archaeological Park of the Valley of the Temples in Agrigento  “A bridge for Europe” – An Ensemble of Brass and Percussion made up of German, Russian and Italian students and teachers with new music in first place at the Temple of Juno also attended by RAI RADIO 3, in 2020 the FdM – a huge Concert of the National Testimonial Paolo Fresu with the ensemble of the Jazz department of the Conservatory in the Valley of the Temples with direct streaming on the channel of Europe and execution of AKRAGAS 2600 – in first run absolute, in 2021 National preview event at the Archaeological Park of Selinunte “20 Stories not to forget” presented by Carlo Massarini and the National opening Gong of the “Festa della Musica” Italia included in the world event “This moment in Time”; in 2022 SICILIAPOP at the Archaeological Park of Selinunte, National and European event in live streaming on the channel of Europe in twinning with Villa Pamphilj in Rome and in collaboration with FEMURS and Conservatory of Naples- presented by Carlo Massarini and selected, for Italy, for the celebrations of the 40th anniversary of the French Fète de la Musique ; in 2021 and 2022 it won research, production and third mission Global Learning II and III projects in collaboration with “Empedocle Univerity Consortium” of Agrigento and funded by the Regional Assessor.  Regional Education and Vocational Training Sicily Region with final orchestral production activities carried out as part of events of National and International importance at the Archaeological Parks of the Valley of the Temples, Selinunte and Pirandello Theatre in Agrigento; in 2022 on the billboard for TAOARTE, in the Ancient Theatre of Taormina, the most coveted among the stone theatres of Italy, together with the most important and prestigious orchestras, with its own production ” La Suite di Templi” engraved and published by Wicky Edizioni of Milan, the result of an original research project and mixtures of languages. Many of the young talents of the Institute have distinguished themselves over the years and continue to rank first in various National and International competitions, performing in theatres of great world prestige, such as Carnegie Hall in New York, the Mozarteum in Salzburg and in various concert Halls and Theatres in Europe, the UK, CHINA  and the USA; in 2017, one of the university students was awarded a high honor by the Presidency of the Chamber of Deputies of the Italian Republic, for having distinguished themselves in international competitions and for having so well represented Italy abroad as a student of the Italian Conservatories; the graduated students over the years have entered the world of the concert profession, as soloists or in orchestras even foreign or, even very young, of the musical education chain of teaching, which the Conservatoire is the leader The Institute, for the quality and variety of training activities proposed and the services offered,  in the last 6 years has managed to attract more and more students from all over Sicily, from other Regions as well as from other countries, thus registering an increase in enrolment in Academic Courses equal to 700%. The Conservatory has the privilege of being part of the first pilot project created within the CINECA Consortium to apply the ESSE 3 computer system, currently intended for Italian Universities, AFAM Institutions; among these it was the first in Italy to have already activated it with great advantages for educational, administrative management and for the related online services rendered to students. 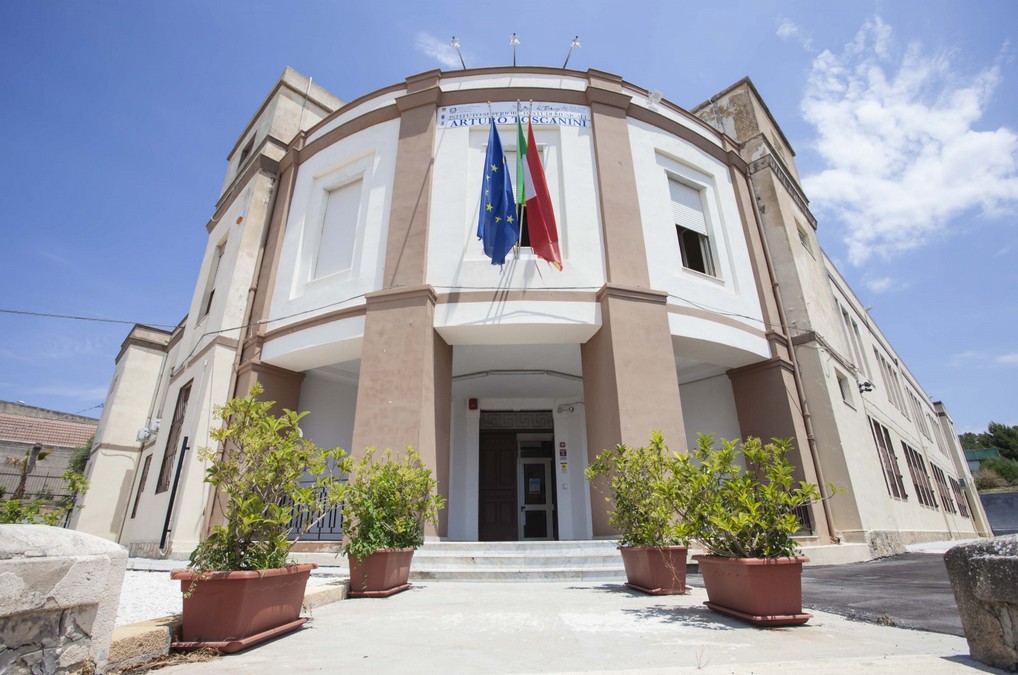